Earlier this month the organisers of the World Fantasy Award announced that they would be making a change. For over forty years the winners of the World Fantasy Award were presented with a trophy modelled in the image of renowned weird fiction author H.P. Lovecraft. However, now there is a wide-spread belief that it is time to shake things up a bit. The coveted award will no longer take the form of Lovecraft’s head, however influential that head may be. As you might expect, this alteration caused a bit of controversy in the sf/f community.

The organisers did not give an explanation for the change, but it is apparent that many feel Lovecraft is not an appropriate figure to represent the award. The problem of Lovecraft’s racist opinions, which some argue figure in his writings, is clearly of particular concern. Quite predictably, a schism appeared in the sf/f world. One side argued that Lovecraft’s influence on fantasy and horror was being denied, while others protested that fantasy has undergone significant transformations since the Award’s initiation, and a new trophy should reflect that. Lovecraft, it seems, represents the  exclusive old guard, whereas we have entered a new era in sf/f, one which is inclusive and embraces previously marginalised voices.

Regardless of your opinion, the Award’s organisers have been steadfast in their commitment to change. There is no going back. In fact, they have recently called for artists to submit their designs for the new trophy. So if you were upset with the decision to oust Lovecraft, you have the opportunity to offer a design for the trophy of your choice. However, the administration have stated clearly that “the ideal design will represent both fantasy and horror, without bearing any physical resemblance to any person, living or dead”, so bear that in mind!

For more on this topic:

Out this month from Tin House is The New and Improved Romie Futch by Julia Elliott. Tin House can always be relied upon to provide fantastic new fiction, and this title is sure to garner attention. Elliott tells the tale of down-on-his-luck Romie Futch who attempts to reclaim his life by enrolling as a test subject at the Centre for Cybernetic Neuroscience. There, he hope to become “new and improved” by downloading knowledge of the humanities subjects into his brain. Safe to say, things do not go as planned, and Romie ends up on the trail of a mutant beast known as “Hogzilla” – a thousand-pound boar possessing supernatural powers. Elliott’s book seems encompass everything we love – undeniably weird, with sprinkling of the speculative and Southern Gothic. We are eagerly anticipating out copy!

Find out more on Tin House’s website and read an interview with Elliott to find out more. 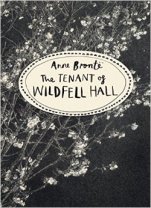 Vintage Classics Bronte Sisters Series
Granted, the Brontes are not contemporary authors, but the dynamic literary sisters are back in bookish news (not that they every really left!). In honour of the bicentenary of the Bronte, Penguin Vintage Editions are re-jacketing Jane Eyre (Charlotte Bronte), Wuthering Heights (Emily Bronte) and The Tenant of Wildfell Hall (Anne Bronte). These fantastic new covers deserve a mention because they so perfectly portray the eerie and Gothic themes embodied in these texts, which often gets let out in mainstream discussions of the Brontes. The jackets were wonderfully designed by Sarah Gillespie, find her stuff here. And just in time for Halloween, too – the only problem is you feel the unrelenting urge to buy the whole set!

The Masters Review – New Voices for the Classic Ghost Story

Gothic is most certainly the theme of the week – the finial item on this list comes from The Masters Review. October is the month of all things creepy, and The Masters Review is determined to let their spooky side shine! The state their aim for the month is to “to bring you as many different takes on the ghost story as possible”, and this week’s feature is the new short story “Clean Hunters” by Lana Valencia. If you’re interested in a bit of non-fiction this Halloween season, The Masters Review has also published some great essays on the uncanny (“Something’s Wrong in the Garden”) and the darker side of literature in their Literary Terms series (“Literary Terms: Gothic, Grotesque and The Uncanny“).

This week, indie publisher Unsung Stories showcased some exciting sf and speculative stories in a public reading. On Tuesday 20th October, a crowed of sf/f enthusiasts gathered in the Star of Kings pub in Kings Cross, London, to hear some fantastic (and fantastical) tales in Unsung’s spoken-word event. The occasion was a great chance to hear some of the very talented voices from the sf world as they took to the mic – and is all the more significant as it is the only live-reading of purely sci-fi, fantasy and horror available in London!

The readings were a brilliant blend of touching, troubling, imaginative and comic tales. These superb stories were provided by David Hartley, Cassandra Khaw, Robert Sharp and Simon Guerrier (see below for links to their Twitter accounts). This was the second spoken-literature event run by Unsung Stories, and we have been dutifully told that there will be more to come! It is a great initiative to get both new and seasoned sf/f writers to share their work, so we will keep you informed on any upcoming events.

We also encourage you to check out the Unsung Stories website for more information about the publisher. They specialise in genre-blurring work that crosses traditional borders of genre fiction, often resulting in a wonderful mix of sci-fi, horror, crime and fantasy. So far, Unsung have published three books – Déja Vu by Ian Hocking, Dark Star by Oliver Langmead and The Beauty by Aliya Whiteley – and we are keeping an eager eye on them to see what they come up with next!

For an impressively detailed account of Unsung Live, take a look at this superb review by Andrew Wallace.